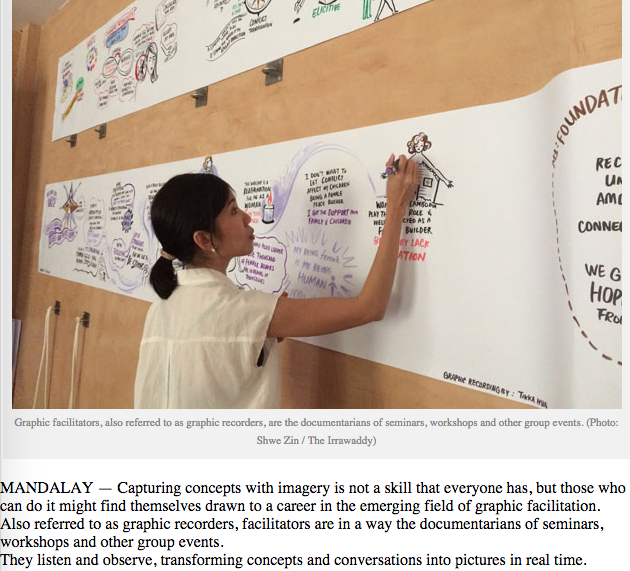 MANDALAY — Capturing concepts with imagery is not a skill that everyone has, but those who can do it might find themselves drawn to a career in the emerging field of graphic facilitation. Also referred to as graphic recorders, facilitators are in a way the documentarians of seminars, workshops and other group events.

They listen and observe, transforming concepts and conversations into pictures in real time. Skilled graphic facilitators have become highly sought among progressive development workers, as they can provide a lasting image that participants can both enjoy and learn from. The pictures produced can transcend language barriers, and remind people of the key concepts covered throughout often dense or unmemorable workshops. It’s hard to find someone for whom that comes naturally, though the field has been growing over the past decade. Tikka Hun, a graphic facilitator from Malaysia, is one such artist who has become well known for her skill, speed and comprehension. Whatever the topic of a given workshop, she just gets it. To Hun, graphic facilitation is all about using visual art to facilitate discussions, brainstorming sessions, or any other group activity during which many people gather to solve a problem collectively or create an action plan. “We can use graphic facilitation as a tool to [find solutions] faster,” she explained.

After studying in Europe, Hun settled back into her home country two years ago and cofounded a creative studio specializing in the up-and-coming art form. She got her business going just by promoting her services on social media and networking with other people who were already working as graphic facilitators in Asia. She now has a broad portfolio of clients in several parts of the world, across China, Hong Kong, Southeast Asia, Russia, Australia and Europe. Hun has even worked in Burma, creating relics of workshops and training sessions that have popped up in the wake of the once-closed country’s “opening up” to the world outside. For her first Burma-focused project,Hun illustrated a six-month Women Peace Leadership training program, organized by Cambodia-based Center for Peace and Conflict Studies (CPCS), which began in January. “I never knew before about peace building,” Hun said, but she quickly adapted to the lingo and concepts, creating intricate murals that simplified the complex themes of conflict and reconciliation. The images help participants to recall key themes long after they leave the conference room.

“Tikka is incredibly talented,” said Courtnae Dunn, the program officer for CPCS, recalling working with the artist throughout the event. “It is powerful to start a training in a blank room, and within a couple of days to have filled it up with our collective knowledge.” Hun would be seen working tirelessly throughout the day, even after the session was complete—filling in words, adding décor, and checking with her clients to make sure she didn’t miss any of the key themes and concepts. Transforming words and ideas in to images doesn’t come easily, Hun said. She trained herself for years, finding that the work eventually became second nature. She also encourages other participants to use drawing as a means of getting involved and advancing discussion, even if they lack confidence or training. “By doing that, they will use another part of their mind that they don’t use as much, and that will change their thinking.” A previous version of this article misspelled the name of the artist, the correct spelling is Tikka Hun.